Trujillo Cabernet Sauvignon is my latest endeavor and a personal labor of love.

Trujillo Cabernet Sauvignon is my latest endeavor and a personal labor of love. Inspiration for this wine traces back to 1982, when I first arrived in Napa Valley from my family’s farm in Colorado. I grew up helping my father year-round in the fields, and learned early on about how soil, climate, pests and critters affect living, growing plants.

After three decades of winemaking experience in all aspects of the business—from vineyard cultivation and irrigation digging, to cooperage selection and blending—I’m proud to now offer my own namesake Cabernet Sauvignon. This wine is a realization of my lifelong passion for crafting red wine, an expression of all that I’ve learned and deeply value about winemaking in the Napa Valley. 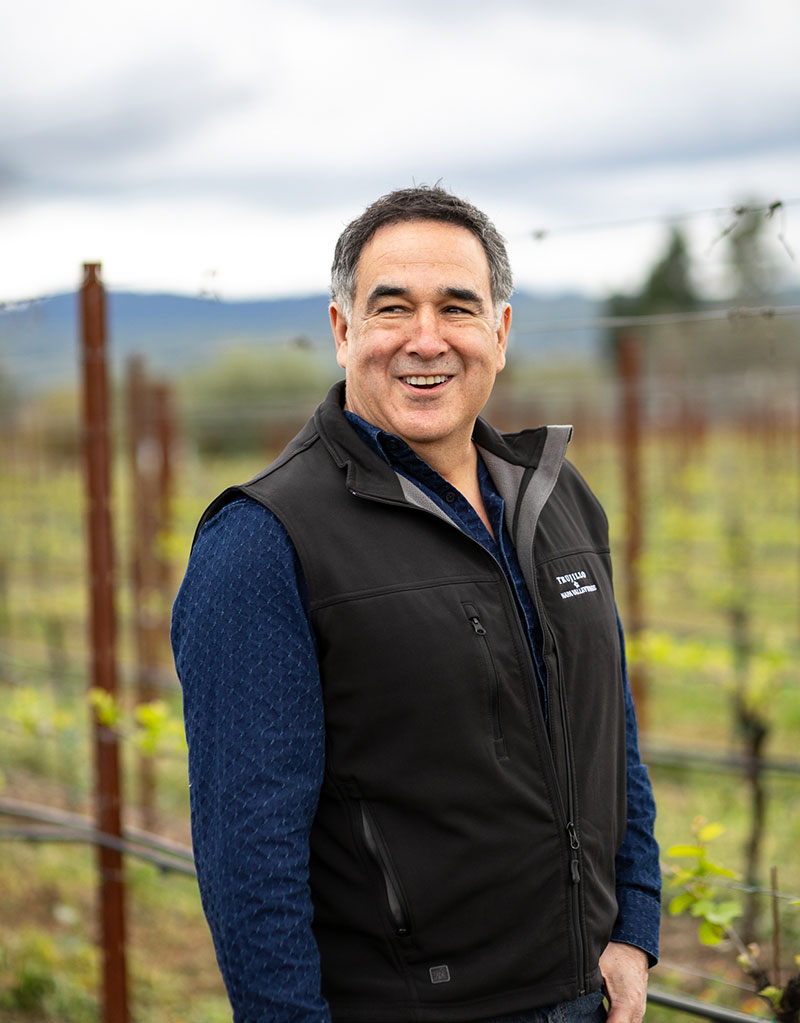 Growing up on a ranch, Michael Trujillo worked acres of hay, barley and vegetables along with sheep and cattle on land tethered to his family for generations. His grandparents were early century homesteaders of Spanish descent who settled in the Rocky Mountain state of Colorado, where they raised their children in a rich, agricultural life. From a young age, Michael learned the value and reward of work- ing the land: “I feel like I’ve always been in motion, branding cows and driving hay trucks since the age of four. Ranch work taught me old-time craft skills, the love of tinkering with farm equipment and how to grow crops in uncertain weather, all of which prepared me for cultivating grapes and the process of winemaking.”

Michael discovered his passion for winemaking in the early 1980s during a spring break from his college studies as an engineer. On a road trip to California, he stayed with a family friend who had a small winery in Napa Valley. It was a life- changing visit, as Michael began to work alongside Jim Allen and his brother Steve in the planting of Sequoia Grove’s vineyard on the Rutherford Bench. For his namesake wine, Michael blends grapes from several of the finest vineyards in Napa Valley and works closely with the growers in developing cultivation practices that yield notable fruit year after year. Trujillo Cabernet Sauvignon is the realization of Michael’s history, knowledge and experience, bringing his keen love of the vineyard together with more than 34 years of winemaking proficiency.

When Michael launched Trujillo Wines, the inaugural 2011 vintage sold out quickly, inspiring him to create a second label showcasing varietal blends. Named in honor of his daughter, Sophia Madelyn, these wines are approachable upon release. Trujillo’s quaint, award-winning (and dog-friendly!) tasting room is located in the heart of St. Helena. Visitors have the chance to taste a range of exclusive wines from a white wine blend to limited production vineyard designate wines and reserve Cabernets. Michael recently resigned as the Director of Winemaking and President of Sequoia Grove Winery to put all his focus to Trujillo Wines and family. His wines consistently earn praise and winemaking medals, and have developed an enthusiastic following.

Call 707-965-2943 or click here for an Appointment
661 Main Street, Saint Helena CA
Sign our Guest Book, and we will keep you informed of upcoming wine releases and
special events, such as wine tastings, hosted dinners and barrel sampling opportunities.